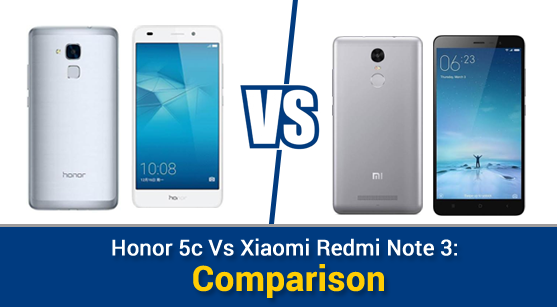 Even after years of existence, Huawei’s sub-brand Honor is losing its customers, market share and brand value. The company has unleashed a bunch of mind-boggling gadgets, but its monotonous launch cycle hasn’t been as impressive as we’d expect from a renowned player. We all like Honor and its phones, but going silent for six months isn’t the best suited way to go!

As of now, Huawei hasn’t showcased any of its flagships, and is continuing with entry-level phones, in the Indian market. Honor 5X was the last one and following this dull schedule, we can see the next big thing coming, the Honor 5C!

As touted by the company, Honor 5C will strive to push players like Xiaomi and Lenovo off the edge. The upcoming device makes a complete package at a tempting price, but the question is, will that be enough to rule out the finest in the category, something like Redmi Note 3?

Well, we’ll get that answered for you real soon. But first things first, let’s compare both these beauties and see which one comes on the top.

As for design, both companies have opted combined their own elements with a sleek metal construction. Honor 5C ships with a clean and premium profile with curved Honor logo on its front and back panel. The device has ditched physical buttons this time, and looks quite ravishing, especially with that squares-ish fingerprint scanner and slightly protruding camera at the back. It all gets inhabited in that metal casing and fits nicely in one hand.

Even Redmi Note 3 is no disappointment. The device, though a little heavier and thicker, looks beautiful from almost every angle. It features a metal unibody with curved edges and stands out in all three colors, Grey, Silver, and Gold. You can carry it comfortably in one hand and can leave a great first impression with that premium looking fingerprint scanner and camera on the back panel.

Apart from size, there’s hardly any difference between the two giants. Honor 5c and Redmi Note 3, go head to head and deliver detailed, colour-rich and punchy visuals with their respective full-HD panels. Both screens are pretty much identical in terms of viewing experience, but as we said, their size is a little different. Honor 5C comes with a 5.2-inch panel with 428 pixels per inch, while Redmi Note 3 incorporates a bigger 5.5-incher panel, eating up more pixels. In real life, they’re exactly alike and a real treat to explore. You can read books, play games, and send messages, even under broad daylight.

Despite being rivals, Huawei and Xiaomi have one thing in common. They both deliver high-end internals and create an ideal ecosystem for work and play. Even in this case, the two phones ship with different internals, but their performance is just very close. Redmi Note 3 packs an octa-core Snapdragon 650 SoC with 2/3GB RAM and 16/32GB internal storage. Its high-end model has got the goods to take on OnePlus X and other big guyz, while entry-level model is pitting straight against Honor 5C that runs on HiSilicon Kirin 650 processor with two gigs of memory. In fact, despite heavy and continuous gaming, they both work immaculately and retain seamless and lag-free performance. So, going for Snapdragon 650 just for its name’s sake isn’t the best way of judging a phone’s power.

While Xiaomi continues with the same old MIUI 7, Huawei gives a favour of Android Marshmallow with its latest Emotion 4.1 interface. There’s a custom skin on both phones, but Honor 7 makes a better package with a bunch of Marshmallow specific features such as, Google-Now-On-Tap, native support for fingerprint scanning and Android Pay, and effective memory management. It’s faster, and snappier than the last time, and doing much than other custom skins, even Android Lollipop based MIUI 7. In our opinion, Xiaomi’s highly touted skin is fast and responsive, but its heavily bloated and is not even at par with the Emotion 4.1 UI or stock Android.

For vibrant and colour-rich shots, Huawei Honor 5C packs a superb 13-megapixel rear autofocus shooter with LED flash and an aperture as wide as f/2.0. The device delivers crisp and detailed shots in all environments, but fails to outperform a slightly improved 16-megapixel shooter packed with Redmi Note 3. It comes with f/2.0 aperture and stands out with elements like phase-detection-autofocus, dual-tone flash, and enhanced pixel count.  You’ll love completing your photography goals with this spectacular rear facing camera.

However, on the other side, Honor 5c’s 8-megapixel shooter is the clear winner. It features an f/2.0 aperture and uses a wide angle lens to deliver perfect individual and group selfies. If you love selfies, you’ll love this phone too!

Redmi Note 3’s massive 4050 mAh battery hardly leaves anything to choose from. It slays over Honor 5C super-impressive performance, and retains a sleek profile even with that much amount of juice. This battery, in our opinion, does the job well on a busy day with couple of hours of calling, five to six hours of screen-on time, and a bit of everything including WhatsApp, Facebook, Twitter, and other social networks. It will give you at least an entire day, regardless of your usage level.

It’s a fairly balanced contest between Xiaomi and Huawei. Both smartphones, priced well-under 10k, make a nice package and deliver outstanding performance, even after heavy gaming and frequent multi-tasking. They have different processors, but performance is just identical.

As for remaining of features of interest, Redmi Note 3 gives you a better camera and a bigger battery, while Honor 5C packs a stunning form-factor, snappy fingerprint scanner and well-optimized software. Both phones have their own positives and leave the final choice to buyer.

If you prefer photography on-the-go, Redmi Note 3 has to be the one, else Honor 5C should be the way to go!